Now that we're fully into springtime (though you wouldn't know it by the current weather) we can hopefully look forward to things hotting up as we head towards summer - and as things hot up you may be asking yourself if you need to add an aerator to your pond?

An  Air Pump (also sometimes known as an oxygenator or aerator), is an integral part of most modern ponds. The bacteria contained within pond filters are there to keep your pond healthy and remove toxins from the pond water. However these bacteria use a lot of oxygen! Oxygen is also required and consumed by fish and plants. A pond with insufficient oxygen levels will not be able to support as much pond life and can soon stagnate. What’s more, in the summer, dissolved oxygen in the pond will be less, as warmer water does not contain as much oxygen as cooler pond water. The higher metabolic rate of your fish during the warmer period can also add to aeration problems.

As well as moving around the pond water and helping to boost the oxygen level in water molecules, aeration in the warmer months of spring and summer can be beneficial for the following reasons: 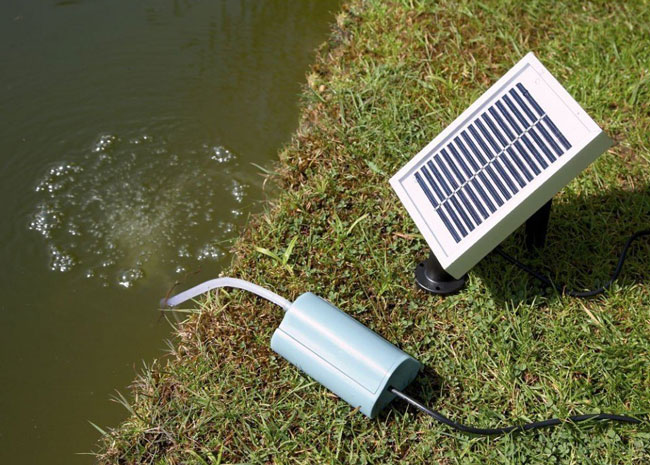 Adding an air pump will definitely benefit your pond no matter what the season but it's especially beneficial in the warmer spring and summer months. There are even solar powered ones with zero running costs, such as our ever popular  PondKraft Solar Oxygenator (pictured above).